Industries can change quickly and construction is no exception. This guide will look at how technology, safety and sustainability have developed, and explore what the UK construction industry is like today.

An introduction to the UK construction industry

It’s hard to ignore the impact the UK construction industry has had on British culture. You’d be hard pressed to drive through any town or city in the country without seeing some kind of work being done – and that bleeds through into the impact it has on the economy.

As the House of Commons reports, 6% of UK-based revenue in 2018 came as a result of the construction industry. All told, that equated to a staggering £117 billion being generated by the sector.

Unsurprisingly, this is mirrored by a relatively high rate of employment. At the last official count, there were 2.4 million active jobs in construction, which accounted for 6.6% of all work across the country.

And it’s interesting to note how high a percentage of those are self-employed contractors. The national average for self-employment in any sector is 13%. In construction, as many as 36% of workers are their own bosses.

It’s fair to say the industry is one which is growing. The following table highlights how much new work is being generated on an annual basis (up until the latest released statistics of 2018): 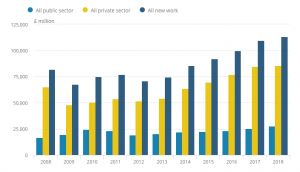 This continued growth has been a trend since 2012, with as much as £113,127 million more earned in 2018 than the previous year. This represents the highest level of financial growth since the records began.

Perhaps most interestingly of all, the demand for new buildings has led to a rise in the number of registered firms in Great Britain. As of the last count, there were as many as 325,736.

As you might expect, there are stringent health and safety regulations in place to ensure no harm comes to workers or the general public on a building site.

The appropriate management of health and safety standards can be broken down into three main categories. These steps all need to be taken into account during a project.

Preparation. This constitutes the phase of the project where you’re planning what work needs to be done, and how each circumstance needs a dedicated level of protection.

Arguably the most important health and safety requirement at this stage is to notify the HSE (Health and Safety Executive) that work is about to be carried out (assuming the work is going to last longer than 30 days).

This is also the time when a construction company will need to find a supervisor. This should be someone with experience, who’s trained in managing and observing health and safety regulations.

Site setup. It’s vital when setting up a project to ensure every aspect of the site is looked at and taken into account. That means things like:

It’s also really important during a setup for a contractor to ensure site rules are written and made as publicly visible as possible. These will relate to the amount of people allowed on site, or how certain procedures are expected to be carried out.

The construction phase. This is when accidents are most likely to happen. As such, one of the most important factors is ensuring all workers on a project have an adequate level of PPE (personal protective equipment).

Other things which are taken into account at this point include:

We’ve written a full guide on how to properly carry out health and safety when working with contractors. Be sure to check it out for a comprehensive rundown of every you might want to know.

The UK construction industry has come under some criticism for the way it dealt with sustainability and the environment as a whole in the past.

In truth, this has been an issue for the global construction sector as a whole. Historically, fossil fuels have been at the centre of a lot of construction projects, while work on site has been a contributor to carbon emissions.

But times are changing. There are now a wide variety of legislations and accreditations in place which highlight whether or not a construction company is taking sustainability into account.

That’s why almost all projects will now have a tailored environmental plan drafted up before any work begins.

This will lay out a number of important aspects of a build, with focus placed on the likes of:

This plan will constantly change and adapt to suit the needs of the environment being worked around. As such, a constant review is a necessity to ensure updates are made throughout a project.

Sustainability in the UK construction industry is an increasingly hot topic. It’s at the forefront of any building plan. And while the numbers are still not quite where most in the sector would like them to be, there’s been a clear shift towards eco-friendly projects.

Just like any sector, the construction industry continues to adapt and evolve in order to survive. Arguably the most influential of these changes comes in the form of new technology.

Let’s take a look at some of the latest tech which has reshaped the way construction in the UK is carried out.

Data calculation is used in the planning stage of any build, giving constructors a detailed understanding when it comes to bidding. AI can also monitor how quickly a project is being carried out, as well as ensure buildings are being constructed in accordance with initial blueprints.

Cloud based solutions also make it very simple to manage records and store important information. Whether it’s scheduling, field reporting or the construction itself, technology makes it possible for a PM to stay on top of a job at all times, regardless of where they are.

The same use could be trialled with construction workers, placing them at perilous heights or in dangerous situations, without the risk of actual harm.

Just as the technology around us continues to grow and evolve, so too does the construction industry. What will the sector look like in 10 years? It’s hard to know.

But what is for sure, is that Stanmore continue to adapt to the ever-changing face of construction.